More About the Good Ol’ Days 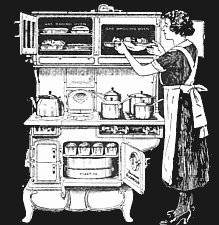 The older we get the more we tend to think about days gone by, the more nostalgic we feel for the days we’ve left behind. I see this so much in my father who’s battling with kidney failure and diabetes. He talks about what he did as a youngster, about the funny people in his community where he grew up and some of the sad and interesting things that happened there.

Do we long for those old days, or just the values of the world back then? Or is it merely a way of coming to peace with our lives, sorting those events and evaluating whether we have lived a life with meaning?

As he told me of Granny losing her washer during the Great Depression, he told me about her weekly trips to the river or the creek to do laundry.  Some years ago we had a power outage that lasted over a week, and I attempted to wash some clothes by hand so I could hang them to dry, rather than waiting for an opening at the laundromat in the next town.  I got some water in the bathtub and proceeded to wash a few items. Swishing them around, I felt like I was living like the pioneers.  This wasn’t so awful.  But have you ever tried to wring out a pair of blue jeans when they’re wet?  After the first couple of pairs, my hands and arms were aching, and the jeans were still soggy.  It didn’t take me long to be thankful for the automatic washer and dryer, I’ll tell you!

He told me, too, about the lean times when she would take them around the hills, gathering edible “weeds” to take home and cook for a meal.  I’ve done my share of herbal remedies over the years, and gathered and dried a lot of plants. But I never went into the field to find out what we could make for supper (and considering my aversion to spinach and all soggy greens, I’m not sure I could handle that).

I will say this much: those early years of hard physical labor really served him well. When he began to have heart problems in his fifties, the cardiologist said even though the arteries had been clogged (from all those years as a meat and potatoes man with little love of veggies and fruit) that his heart muscle was exceptionally strong and kept things going despite the issues.  Will my generation be able to have that same benefit? Most of us never worked that hard.  We “boomers” had it a lot easier than our parents and grandparents. More money and less work and less real responsibility. But with all the prosperity came a decline in spiritual values and an emphasis on materialism.  We have more stuff and less moral fiber than any generation before.  Sad tradeoff if you ask me…

What About Those Good Ol’ Days? What world do they live in anyway?