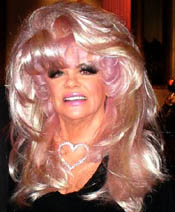 Since we dumped our cable TV a few months ago, we have rarely missed it. The kids found plenty of other things to do without the boob tube and we don’t know how we had time to watch it. But last weekend we visited a home where they were watching some of the Christian channels on their cable, many of which we had never seen. We flipped around from channel to channel, listening and observing, wondering at first if maybe we were missing out on some interesting programming.

Nope. We weren’t.  It’s a small wonder that so many in the world think Christianity is a joke. Watching some of these Christian shows was downright embarrassing! These are people who preach and teach daily or weekly, and gain entrance to the homes and minds of hundreds of thousands of people….and more than a couple of them should be cause for an automatic lockout on the channels. Many of them are fodder for late night comedians, and frankly, they are so laughably awful, it’s understandable. Why do people with a brain take these clowns seriously….and more importantly, why do they believe these pathetic hucksters are preaching truth…and why do they NOT give an ear to REAL preachers who have present truth to share right from the Bible?

I’m not talking just about Jim and Tammy Bakker, although that is the most prominent name that comes to mind when you talk about ridiculous women in ministry. Jay Leno joked once about Tammy Faye wearing Sears Weatherbeater Makeup…good line!  But she’s off the scene, long gone and out of the public eye.  Meanwhile there are several divas of Christian programming that should be shuffled off the scene.  Like Jan Crouch of TBN.  She makes my skin crawl! The pink hair in that Dolly Parton/Little Bo Peep cross and 4 inch fake eyelashes. Is she a drag queen? Ugh, just HIDEOUS.  But worse than that is the spiritual arm-twisting of TBN when it comes to getting people to send them money. That makes me FURIOUS.  Just listen to this clip:

And we caught the tail end of another show, which was pretty good, actually. Then they brought on their matriarch and when that face flashed up on the screen we all said out loud, almost simultaneously, “What is THAT?” The ministry is called “The Awakening Hour” but none of the men in the room wanted any awakening to a face like that. Wouldn’t it be a kindness to give this woman a tasteful makeover for a Christmas gift or something??? 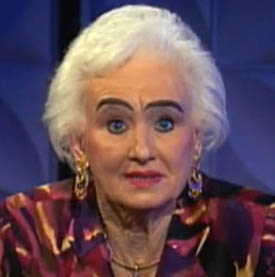 Ugh and double ugh! The makeup was bad enough, but watching this woman try to read a teleprompter was downright painful. I don’t care if her husband WAS the late founder, putting her in front of a camera is a disservice to sanity. The scary woman, Dr. Freda Crews, now has a show of her own, called Time For Hope. We can only HOPE that time will persuade her that she’s NOT really TV host material.

Tears in the Department Store Where There is no Vision…