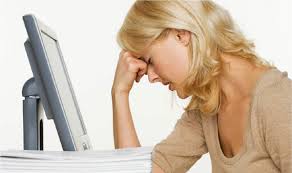 My computer began to bog down this morning. I finally rebooted it, only to get a black screen with the ominous message: ERROR! System fan failure. Please service your PC as soon as possible.

This is the same computer that had the hard drive replaced last month…my six month-old computer.  They sent me the hard drive, which was not hard to replace, and eventually sent me the restore CD’s to set up Vista all over again.  I reinstalled, but something kept hanging on the process.  I reinstalled Vista seven times and finally gave up and contacted HP again.  They sent me new restore CD’s and the reinstall went without a hitch.  So I’ve been reinstalling all my other programs, updating everything, for the last three weeks and now this.  Makes a body want to sit down and cry.

The friendly technician at HP told me the system would have to be returned to HP for service, unless I wanted to pay $100 for a technician to do an in-home replacement of the fan.  They insist that a user cannot replace the system fan because it’s attached to the processor.  And I do remember my first computer needing the CPU fan replaced many years ago. I bought the tiny fan and followed the instructions. Only there weren’t any instructions for putting the processor back onto the motherboard. It was a square chip with a bunch of prongs on it and one corner clipped, but there was nothing on the motherboard that indicated where to plug it in, or in what direction. Apparently I picked the wrong direction for that corner chip because there was a bright yellow flash when I booted up and then silence…fried my motherboard.

So now I wait for the box in which to package the CPU, ship it back, and wait….9 business days!  I’ll be able to use my husband’s system in the meantime, but it’s still frustrating. I have everything here on my computer the way I want it. I have my tools and my own way of doing things.  He and I will have to jockey back and forth for time on the computer, and I’ll have to install my software tools on his system.

Computers were supposed to simplify our lives……………