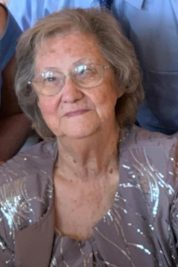 My mother-in-law passed away unexpectedly last week. Emotions came like waves, hoping that she would pull through the medical crisis, praying she would show signs of improvement, and then a kind of numb disbelief when suddenly word came that her body was shutting down and this was goodbye. To see her children and grandchildren around her bed in the hospital, sobbing while rubbing her hands and face and telling her how much they loved her was a scene I won’t ever forget. Few receive that kind of love, and from so many.

As we moved through the details of arranging for the funeral, there were so many little memories shared about her. Some were funny, some heartbreakingly bittersweet. She will never be forgotten.

I couldn’t help but go back in my mind to an old movie I treasure, called “I Remember Mama” about a Norwegian family who settled in San Francisco around 1900. The movie is based on a true story written by the oldest daughter. Mama was the one who was the heartbeat of the home. They had very little income, but the family kept things going with creativity because Mama told them they had an account in the bank. They didn’t want to use it because it was for “big things”. So when they needed money, the kids would find creative ways to earn some extra cash. Mama would say, “Is good. We do not have to go to da bank.”

When their “rich” uncle Kris died, the family expected to inherit his fortune. But on his deathbed, he gave Mama his account book. She told the family there was no money left. Uncle Kris had spent it all on surgeries for children who had been crippled as he was. His notations in his book showed how much he’d spent on each of the surgeries, and afterward just one word: “Walks” The last entry in his book was where he’d paid for surgery for the youngest son, so Mama finished his entry in the uncle’s book with: “Runs.” And once again came the simple response from Mama and her sisters: “Is good.”

At the end of the movie, the kids learn Mama never had any bank account, that Mama had kept up that pretense because “is not good that children should feel poor.”

My mother-in-law raised four wonderful, intelligent children, and helped in raising six of her grandchildren. During the years of raising her four, she barely got along on a meager income as a single mother. I have no clue how she managed on that small amount. It was well below poverty level. But none of the kids recalled feeling like they were poor growing up. They all graduated from high school and have lived very responsible, productive lives. They produced fourteen phenomenally talented, beautiful grandchildren who loved their grandmother, and I only wish some of the thirteen great-grandchildren had been able to get to know her. Some people blame poverty for the drug and crime problems in our society. But this family is a living example of the fallacy of that thinking.

It’s been my privilege to have been a part of her family for more than forty years. Many of the qualities I love in her son came from the way she raised him. I will forever be thankful for her love and influence. Rest well, Mom. You’ve earned it. Is good.

The Journey with Lyme and Bartonella A Mother’s Winter Musings