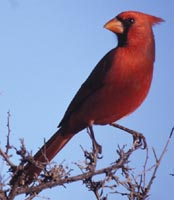 This has been a really WEIRD year.  The weather has been about as strange as I’ve ever known it, with wildfires out west and a drought here in the east and floods in the midsection of the country…burning up at both ends and drowning in the middle.  And we are officially calling 2007 the Year of the Ant. I have never seen so many ants inside the house before. Usually we see them in April, and they are annoying, but they go away. Not this year. Every month seemed to bring a new round of ants in a different size.  But the strangest thing (so far) this year is the Kamikaze Kardinal.

We have always enjoyed birdwatching, and have several feeders around the house for the fun of seeing and identifying the variety of birds that show up.  This year we have a male cardinal, however, who must be totally out of his mind.

At first it was just the cars: if we parked a car at one area of the driveway, near some landscaping, we noticed this cardinal would eventually start attacking the side mirror.  He would fly at it over and over, sometimes hovering over the mirror while he attacked.  Left a lot of nice white streaks down the side of the car too.  No matter what car it was, if the mirror was there, he went after it.  So we stopped parking there.

But that wasn’t enough. I think it’s got to be the same bird, but no way to know for sure. We have a cardinal attacking various windows in the house. He smacks at the office window facing the front porch, or he sits on the air conditioner and attacks the side window. Sometimes he fights the back picture window and occasionally he gets Elijah’s window upstairs.  I’ve seen him retreat to the cedar tree and call loudly for several minutes after his attacks.

Simeon (our 7 yr old) has taken to referring to the cardinal as “The Red Baron.”  Now that’s pretty clever, if you ask me.  The Red Baron was a famous aerial dogfighter in World War I. I grew up hearing “Snoopy and the Red Baron” as a pop song.  But how did Simeon come up with that??? It’s a mystery to me…