Ready for the Storm… 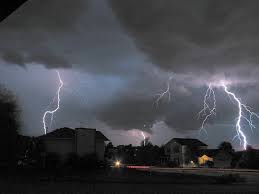 Maybe I’m crazy, but I love a good thunderstorm. Those who live in a crowded city can’t possibly appreciate the beauty and wonder of a strong storm. The flashing of lightning in an array of colors, hearing the thunder rumble and roll across the hills, the smell of the air after a storm…

I’ve raised a whole flock of storm lovers.  Sometimes when a storm is brewing, my daughter will call from her place on the hill behind us and tell us to come up and watch the storm from her porch where we can get a better view.  We’ve spent many summer evenings on a porch watching an approaching storm.

{mosimage}One evening we watched an incredible display of flashes and streaks in the dark sky.  The flashes illuminated big cumulus clouds with a backdrop of pale green and lavendar and blue-white light.  It was better than any fireworks display, and we watched for over an hour.  The storm never reached us, so all we got was the light show. Later we learned the lightning was actually a storm in Greensboro, North Carolina.  Talk about a bird’s eye view!

There’s a lot to be said about living in Floyd County where many of the elevations are among the highest in the state.  We can look out at the mountains all rolled up against each other in the distance. Some mornings we can see the valleys filled with white clouds like cotton candy, lining the low spots.  And we can look out and see approaching storms.  Sometimes it’s just a dark haze in the distance moving slowly across the horizon. Occasionally it’s big dark thunderheads rolling toward us.  We’ll feel the temperature changing and watch the leaves on the trees begin to turn so their backs are facing outward.  When we can tell a storm is coming, we start getting ready. We check for open windows and anything that could be damaged by rain or blown around.  Computers are shut down and unplugged.

{mosimage}Last month a storm rolled in here like a giant pancake of clouds.  It stretched from one end of the sky to the other and moved across the county, darkening everything in its path.  The line of clouds just sort of slid across overhead like a door closing.  It was eerie, being out in the open watching that coming.  But we rushed for the camera to get as many shots as we could.

Once we feel we have all the hatches battened down, it’s almost a party atmosphere in our family. Everyone gets out to the front porch or the place with the best vantage point, to watch.  Last night we went to the sunporch on the second floor where there are windows on all three sides.  We stretched out in the floor with pillows, and got a panoramic view of the storm.

There are times right now where I feel a storm coming, but it’s a storm cloud covering our country…even the whole world. I feel the darkness sliding across the sky and I know it’s coming.  But being ready for THIS storm is another matter altogether…

{audio}/audio/Ready_for_the_Storm.mp3{/audio}
Ready for the Storm by Dougie MacLean