Some changes are bittersweet 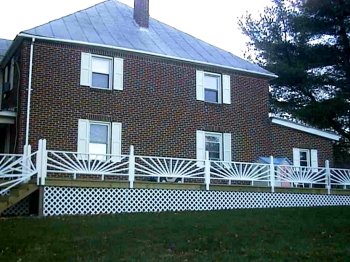 We thought it was our dream house when we came here. I guess I’ve mentioned before that we’ve lived here in Floyd for twenty years now, but I probably haven’t said much about our house.  It’s at least a hundred years old, and was built strong and big.

My favorite thing, though, was the front porch.  A front porch spanning the whole length of the house, wide enough for kids to ride tricycles and big enough for a porch swing.  Oh, and there were two big maples in the front yard, whose branches reached out and touched each other over the sidewalk.  With 10 acres and a creek, it was a wonderland to our kids.  That first summer the four older ones spent HOURS in an inflatable rubber boat, paddling from one end to the other of a dammed up section of the creek.  I knew they were safe, the deepest part was only about two feet deep.  But it was enough for floating and paddling and pretending.

We did some remodeling, updating the plumbing and electrical stuff, putting in a new kitchen and new bathroom fixtures.  And we added an attached double garage and family room, and then a deck that went all the way around the side and met the front porch.  That tripled the space for riding trikes and skating. Only now when they ride past my office window, it sounds like a train running past the house, as their wheels go across the wooden boards.

Four more children were born since we moved here (Jerry joked when we were married that one day we’d have our own baseball team…well, nine makes a team, doesn’t it?)  The years have flown, and two or three weddings and five grandchildren later, it’s time to downsize. With only three kids left at home, it’s just too much to keep up with the house and yard work.  This place was built for a crowd, and it was perfect for us.  But it’s time to change, and to say goodbye to all those wonderful family memories that happened here, the tire swings and badminton games and snowball battles and sledding from the top of the hill (where we built another house) all the way down to the creek.

We hope to find someone who wants a grand old place like this, either to raise a family or grow a school or just run a bed and breakfast.  Give someone else a chance to grow a houseful of memories.

My poor man’s stained glass window Being a Late Boomer