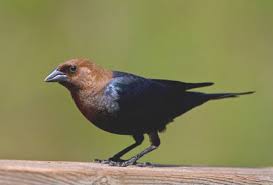 This week I had some new activity at my window birdfeeder.  We were visited by some starlings (or are they grackles? I have to get that bird book out again and look) and a cowbird!  Cowbirds are interesting critters.  They don’t build nests.

They go around looking for nests that other birds have built and push out one of the other bird’s eggs and lay their egg in its place.  Then when the eggs hatch, the cowbird is bigger and more demanding and aggressive than the other baby birds. It gets all the food and deprives the other birds of food. A very nasty thing when you think about it.  I wanted to chase that cowbird away from my feeder and off my property when I saw it.

But don’t we know people who are just like those cowbirds?  They don’t work for themselves, just suck off the system and catch a free ride while the rest of us work and pay taxes to support them.  Essentially they steal the labors of others and get others to do their work while they do whatever they feel like doing.  I thought of that this week while the police were hunting Steven Branscome and the media was out there trying to interview his family and friends. They wouldn’t turn him in if they saw him, and they don’t think he would hurt them or their children.

Well, tell that to the state trooper who’s got a bullet wound in his neck.  Tell that to the businesses that were burglarized.  Tell that to the homeowners whose houses were broken into. Do you know what kind of effect a burglary has on the occupants of a home?  Their sense of security in their own home is forever shattered. It’s not unlike the emotions of a victim of rape or mugging.  The only difference is they have no personal encounter with the attacker.  Branscome has a trail of victims, stretching back for years, all of whom could probably tell you about the impact of his actions.

Here in Floyd people nod knowingly and say, “He’s a Valley Boy, that’s how they are ‘down there.’ Drinkin’, fightin’, and stealin’ are just a way of life with some of ’em”  And maybe they know what they are talking about . Indian Valley does have a colorful history of moonshine production, and during the Prohibition era and beyond, there was always a strong sentiment of dislike for law enforcement in the area.  So it’s no surprise that Branscome has probably had help eluding the authorities this week.  Some people like helping the underdog, rescuing the poor outlaw being chased by the lawman.  But that means someone out there is risking their future to help him. If they enable him to continue his cowbird ways, they can be charged as accomplices in aiding a fugitive.  So the cowbird keeps getting others to carry his load.

A tribute to our rescue squads Dreams of the American Idle