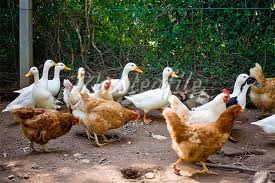 My husband just laughs and shakes his head when I come home from shopping. He knows I will have a bag of dog treats, several cans of cat food, sunflower seed for the bird feeder, and a bag of feed for ducks and chickens. He calls them my feather and fur babies. I have a tall bird feeder for songbirds mounted near the family room window where I can watch the birds feed all winter. And the ducks and chickens, ironically, aren’t OURS.  They belong to the next-door neighbors, but they roam over to our yard in search of bugs and food on a regular basis.

Originally it was a dozen chickens and a white duck. When I saw them in the side yard, I would toss out some table scraps and enjoy the rush of wings heading toward the feast. It didn’t take them long to see us as their supplementary feeding spot. I enjoyed the variety of colors in the different chickens. And the duck was like a feathered alarm, quacking whenever someone opened the door.  No matter what door I opened, it seemed the duck would hear it and notify the others. It became a daily thing to throw food to the chickens.

In recent months the flock has increased. There are nearly a dozen white ducks and a pair of mallards in the group. Instead of going back to their pen next door, a lot of nights they camp out under our van. As soon as day breaks they start quacking at the first signs of movement. A dog runs by, they quack.  The cat goes chasing a mouse, they quack.  Better than a guard dog. So now when I go grocery shopping, I pick up a bag of cat food or dog food and that is parked by the door with a scoop, ready to throw out a round of treats to our feather babies.

The cats and dogs seem to take the flock in stride. The cats are a little intimidated by the sheer numbers, I think. But the dogs regard them as pests. The flock comes near the door, and the dogs like to go “bowling for chickens” (guess it’s more like bowling for ducks now) and they race out into the flock, scattering them back to their “safe” haven further in the yard.  The dogs have no interest in chasing them, or eating them.  They just don’t want them around our door areas. And considering the mess that the feather babies can leave behind, I kind of like this arrangement.

Last winter we started having an invasion of stinkbugs. They were everywhere on the north side of the house. We heard stories of friends battling epic numbers of the nasty critters. But since the chickens and ducks started patrolling our yard for food, we have hardly seen a stinkbug. Nice side benefit!