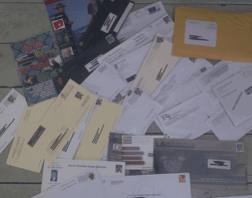 My second son moved to North Carolina last weekend.  He hasn’t completely settled in yet, so he hasn’t changed his address to the new one.  So his mail still comes here where we save it for him.  Ordinarily he gets one or two pieces of mail a month.  This week he got seven in only two days.  And mysteriously, all of them were from law firms!

The envelopes began arriving on two or three at a time. Each one says the same thing on the front: “This is an advertisement for legal services.”  I had to wonder what in the world my son could be involved in that would interest all these law firms in him, and so suddenly.

Today I got the answer. On his way down there, he got a speeding ticket.  Apparently the ticket to an out-of-state driver triggers this unique system in North Carolina, where the offense is broadcast (presumably) to a list of (most likely subscribed) attorneys.  These friendly attorneys then send off a form letter offering their services to the hapless ticket receiver.

But at another level, it’s just tacky…and you have to wonder what’s next.  Will the coroner’s office set up a subscriber list for funeral homes to contact the next of kin of the newly departed, offering their services?  Will Social Security create a list for those in wills and estates or investments to contact those who reach eligibility for retirement benefits?

Countrified and I don’t care who knows it Yeah, I’m a humbug…