Ripples: My Approach to Life 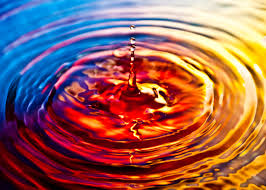 I’ve become accustomed over the years to being at odds with life. It’s not something that happened to me all at once, but rather gradually as I was introduced to new ways of thinking. Each wave of “new thinking” was explored and considered, and led me to another wave. All the waves were related to each other, all tied together. Much like ripples in a pond. I’ve come to refer to this process as “organic learning” because it’s happened very naturally.

In my youth I was introduced to Bible study. It was REAL Bible study, not just surface reading as I had done in the churches I visited during childhood, with a verse here and a verse there. That opened my eyes to being “at odds” with the world, because I learned that our way of life and thinking aren’t naturally the same as God’s. When you look at life from the framework of God as Creator and Originator of life, you find that at Creation everything was perfect.

This is the absolute opposite of what is being taught to children today in the theory of evolution. If you view science and history through the framework of creation and the fall of man and the natural deterioration that followed, things fall into place. The so-called geologic column is not a reflection of millions of years of evolution but rather the result of a worldwide catastrophic flood that left the contents of earth swirling around and settling for about a year. The layers make perfect sense in light of a flood, but no sense at all in the context of evolution because there are things in the layers that could not have happened over millions of years. That’s an over-simplification, of course, but just an example of the waves of change in my education.

The next wave was health. I began to learn, way back in the 1970’s that the wave of interest in natural foods and natural remedies was not some “new age” hippie culture product, it had very biblical roots. God had given the first man and woman a diet to keep them healthy: fruits, nuts, grains, and vegetables. Those original four food groups contained all the building blocks for a healthy body to live and grow. And that He had provided “the leaves of the tree” (herbs) for healing from sickness that ensued after the fall of man that took him away from the perfection that he’d been given at Creation. So early in youth, I began to learn about natural remedies and a more natural diet. I read books on herbs and healing and experimented with a vegan diet. I tried natural remedies when needed.

Then I was introduced to parenting and educational concepts, things that were simpler and more natural, and yet, completely at odds with the world in which I was raised. Homeschooling was one of those things, years before it began to be talked about and fought for in the court system. Parents as the primary educators, passing along their wisdom and faith and values to the next generation. In its simplicity it was as natural as breathing. And yet it was completely out of sync with popular notions about raising children.

The time came when I had children of my own and was able to experiment with the things I had learned and thought about. I also used my studies in health to give them as good of a foundation as possible for their bodies, and used natural remedies to treat them when they got sick.  One wave of thinking flowed into the next and the next. I watched how children learned and grew, and considered their natural interests as they began to learn. How could I best encourage a healthy mind and body in them? That was my focus. This led to a lot of discoveries about what worked to encourage a healthy mind. It also led me to some observations about the modern trends in education and how some systems work to tear down natural intellect and creative thought.

Some might refer to this as “wholistic” in that I was working with a view of them as a whole being, mind, body, and spirit. I would go in my mind to the concept of Eden, to man placed in a world with no sin or sickness or death, and then after the fall, how the world changed. How would they learn what to eat, what to wear, what to use to treat illness, how would they teach the next generation? Not from the concept of ignorant caveman as evolution teaches, but from the standpoint of intelligent design. God gave mankind this amazing mind, to be able to reason and strategize. That didn’t just “evolve” from stupidity to intelligence, nothing in nature innately does that. Man had to figure out how to adjust to a broken world and its consequences. And only by trusting Divine Intelligence could he look beyond the immediate circumstances and find solutions to the problems the fall had created.

More ramblings on these “ripples” in my life and where they have led next time.

Blurring the lines Lyme marches on…