Will the People Speak? 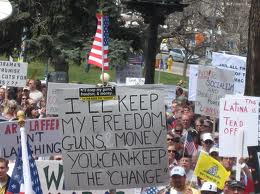 My last ramble was just the lyrics to a song you could listen to here.  Much of my ancestry is Scottish and I’ve been drawn almost irresistably to Celtic styles of music for as long as I can remember. But as I listened to this particular song, it got stuck in my head.  For days, when I was alone in relative quiet, snippets of that song would go through my mind.

I couldn’t help but think that this song ought to be something that everyone in this country gets to listen to.  We have a world in turmoil right now. Our economy is shaky, we have an election approaching (and frankly, none of the candidates is remotely appealing to me), there are rumors that we’ll go to war with Iran, we can’t afford health care, groceries, or gas very well anymore.  But underneath it all, I sense that we as individuals feel pretty helpless about it.

This helplessness is probably what concerns me the most. Some believe the deck is already stacked against us, that no matter how we vote, it won’t make any difference.  They argue that the house of cards is about to fall and we are powerless to stop it.  I guess I have enough of that Scottish independence in me that part of me is longing to shout “Freedom” like William Wallace in Braveheart.

If this country (and indeed, the world) is doomed, and beyond all hope of repair, that’s reality and we’ll all have to deal with it.  But I would at least choose to spend whatever time I have left fighting to make a difference, giving someone else the courage to fight the darkness threatening our world, and give it our best shot, instead of wimpering and hiding and trying to save whatever shreds of existence we have under some chaotic leader.

What if we each decided to speak, to take action, to vote, and to let our voices be heard? All sorts of ideas have been tumbling in my head today. What if we did some sort of viral online thing, challenging everyone to get off their apathies and DO something to change things. We don’t need some big budget media blitz, we have the Internet, and the ability to share with our circles of friends. Between the bunch of us, I think we could impact our world. Stop letting the news media and Hollywood and Wall Street speak for us and speak for ourselves.  If you do it and I do it, that’s two voices than there were yesterday.

When the People Speak That’s It! I’ve had enough!