That’s It! I’ve had enough! 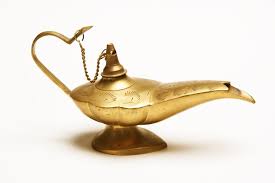 This week someone sent me a joke via email that included a spin-off on Aladdin’s lamp.  The fellow was granted two wishes, and his first wish was that every time he needed to pay for something, he could reach into his pocket or wallet and always have just the amount he needed.

That concept really intrigued me.  Most of us would have wished for a million dollars or more wishes, or something…at the least, a sum of money that would likely take care of our needs and wants for the rest of our lives. But this fellow only asking for “enough” has just been stuck in my head for days.  We live in a land of “too much” as it is.  Too much clothing, too much food, too much to do… what if we were always guaranteed “enough”?  Would enough be enough for us?  Or would we want more?

I’m a woman, and I naturally like having a sense of security. I like having a house where the roof doesn’t leak and the wind doesn’t howl through. I like being warm in the winter and cool in the muggy heat. I like knowing when I flip the switch on my air conditioner it will cool and dry the air in my office. I like to feel sure when I turn on the shower the water will come out hot instead of icy cold. I don’t long to be rich, I really only want to have enough to pay the bills and keep things steady.  And in so many ways, I have more than enough.  So why do I have this restlessness inside, this nagging worry that somehow something bad might be just around the corner?  I guess so much comes down to trust.

I have a sticker on my guitar that I put on there back in 1974.  It says, Peace is not needing to know what will happen next.

Will the People Speak? In Stillness and Simplicity